Movie Review: The Martian shoots for the stars and hits its mark 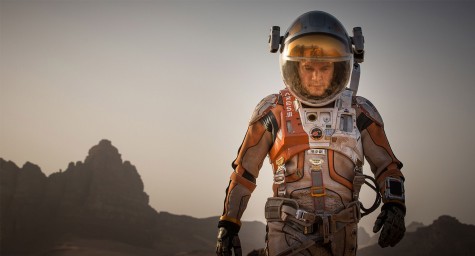 Photo from the official trailer.

Movies like “Interstellar”, “Gravity” and now “The Martian” remind me why humans in the twentieth century looked up towards the moon and stars as a challenge waiting to be conquered.

“The Martian” starts with a small team of astronauts going about their regular day on Mars when a huge storm hits. The dust storm threatens to tip their only ride back home, prompting an emergency escape.  Matt Damon’s character, Mark Watney, gets left behind on the assumption he had been killed in the storm.

He wakes up a few hours later with metal in his side and critical oxygen levels. He barely makes it back to the home base in time to breathe and has to find out how to survive on Mars for an indefinite amount of time.

For the rest of the movie, Damon tries to survive with impressive scientific feats and limited resources.

I’m no rocket scientist, but there was never a time when I was confused as to how something worked. The movie explains every machine and algorithm in such a way that a child could understand it, but doesn’t go so far as to feel excessively dumbed down.

Through the adventure, you’ll have to wince through self-surgery, nail-biting suspense, and every example of Murphy’s law. It’s amazing how the movie breaks apart these segments with comedy.  I really didn’t expect to laugh as much as I did at this movie. For every heartbreaking failure that Damon experiences, there’s a counterbalance with a hilarious accident.

Damon’s dialogue is unexpectedly hilarious. He refers to himself as the best botanist on Mars on multiple occasions, blows himself up when trying to make water, and comes to the conclusion that the laws on Mars are equivalent to those in international waters which makes him Mark Watney: space pirate.

It really is a great feeling to hear all of the out of this world solutions that NASA comes up with to attempt the rescue mission. Each one gets more and more ridiculous, but never so much so as to feel impossible. As Damon puts it, “I have thousands of the smartest people on the planet trying to save me, and the best thing they came up with is to hit my rover with a hammer.”

If Gravity was your kind of movie, then The Martian will be right up your alley. If anything, The Martian is just as deserving of Gravity’s awards, if not more. I just can’t get over how much fun it was watching this movie. It was an amazing time and I would definitely recommend seeing it in theaters or even buying it when it releases on DVD, because I know I will.