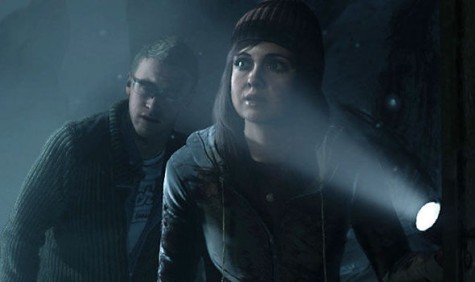 By now, you’ve probably heard a thing or two about the Playstation 4 exclusive Until Dawn. It was originally planned for release on Playstation 3, but the extra time and care they’ve taken over these past few years and the jump to PS4,  was very much worth it.

Until Dawn, by Supermassive Games, is regularly compared to Playstation 3 gem Heavy Rain. It’s easy to see why within ten minutes of starting the game.

You won’t find twitch shooting and competitive multiplayer here. Those aspects have been replaced for a more classic adventure game feel where exploration is rewarded and adrenaline rushes come from quick-time events.

The story follows eight teenagers on vacation at a mountain resort and takes place one year after a horrible accident resulted in the deaths of two of their friends on the same mountain.

It feels as if the game is split into three separate sections. The first is your usual horror movie set-up where most of the scares will come from other characters playing pranks and wearing scary costumes. In the second act, the stakes raise almost immediately with the introduction of a typical slasher movie villain. The final act takes a more supernatural turn that is truly horrifying.

In the game, you switch between playing as all eight of the characters. Each one has his or her own personality and relationship with the others. All the characters have at least one relatable trait, so it won’t be hard to find your favorite and least favorite character.

Gameplay in Until Dawn is best described as an interactive movie where quick-time events guide the action, and choices can change the outcome of the story. The quick-time events are never intrusive and feel natural. They’re never put in just to make sure you’re still awake unlike Call of Duty’s “Press F to pay respects.”

The graphics in Until Dawn are one of its strongest features. I’ll never be one to say graphics are more important than gameplay, but when you have such a cinematic game, I think it’s very important you have strong visuals. They’re some of the best I’ve ever seen, though sometimes they do fall into the uncanny valley and things look a bit off. In some cases, the animation is so smooth, the characters look incredibly realistic.

Sound is just as important in horror movies, and Until Dawn continues to pay homage to these with its sound design. The music always sets the mood, and the nails on the chalkboard suspenseful sounds are great at making you not want to look behind that door.

One mechanic is a quick-time event where the motion sensor in the controller is tracked, and if it moves, even slightly, something bad will surely happen. This ranges anywhere from moving a flashlight away from someone who needs the light (which has no real consequences) to something as bad as the death of a character mere minutes before the end of the game.

The anxiety caused by the “don’t move” quick-time events is almost unbearable. When the killer is just around the corner, the controller starts rumbling with an ever-accelerating heartbeat and slips from the sweat on your shaking palms as you push through one of the scariest parts of the game.

The butterfly effect is the game’s second new mechanic. Something as simple as who gets to hold a weapon can determine who lives and who dies. The game will make sure you know when you’ve made one of these choices by filling the screen with fluttering butterflies. This will lead you to freak out thinking about the impending disaster or breath a sigh of relief knowing you just made it out alive where you could have died.

The game certainly lives up to its horror branding. There were scenes when I was legitimately petrified. Jump scares happen every now and then, more near the start of the game, but they’re traded out for more legitimate horror later in the game. They do show up sometimes, but so smoothly that they add to the adrenaline rush of being chased rather than just being startling.

Choices in this game are fantastic, even the ones that have a minimal effect. A perfect example of this is the interjecting sections of the game that come in between each chapter. You have regular “therapy sessions” as an unnamed character with a therapist named Dr. Hill. He will ask you questions about what scares you the most, such as gore or needles, scarecrows or clowns, spiders or rats, things like that.

You’ll also be asked which characters are your favorite or least favorite. These choices matter, although minimally. They’re there, mainly, to personalize each playthrough session. It will change what scares happen later in the game, give you a chance to kill your least favorite character, or kill off your favorite in a terrifying, bloody, death.

Until Dawn doesn’t leave you guessing which path to take so your favorite survives. Throughout the game, you can find Native American totems hidden in the environment that can show you future scenes in the game. Some show you the death of a character, a future threat you can try to avoid or the correct choice when you come to a fork in the road. Nothing is certain, though, and the visions you see might not always come true.

Despite how good all these things are, the game isn’t perfect.

I’m no graphics elitist, and the game’s graphics are fantastic, but for some, this doesn’t excuse the 30 FPS and regular frame drops. The game wouldn’t necessarily benefit from 60 FPS and stays smooth in scenes that matter. You’ll never miss a quick-time event due to a sudden drop in frames.

Some of the quick-time events are unforgiving to the point where failing one will give you no chance of redemption to save a character’s life.  For instance, very late in the game you get a series of three “don’t move” quick-time events. I love these, but I hadn’t failed one up until this point. Just so happens that this series of them, still scary as ever being inches away from a horrifying killer, would be an instant death if you failed one (which I did). That’s especially frustrating when not even ten minutes later, I completed the game with one less character, one of my favorites, no less, because of a simple mistake.

There are a few problems with certain choices in the game, too. The very first death I experienced in the game felt unfair to me. I had gotten a totem earlier that told me to give a flare gun to a certain character; so, when the choice arrived to do so, I followed the totem’s advice. He shot it into the air instead of holding onto it and was attacked and unable to defend himself later in the game.

After a quick Google search, I discovered a choice an hour earlier in the game somehow affected whether or not he’d hold onto the flare gun or shoot it into the air. This is worse than the “don’t move” death I had gotten earlier, because that was at least my fault. I had no idea agreeing to go someplace with a character vs. disagreeing would wind up with another one of my favorites dead.

All in all, Until Dawn was a fun experience, but not worth sixty dollars. The story does change throughout playthroughs, mostly who lives and dies, just enough to warrant multiple playthroughs if they’re spread far enough apart. That way, you won’t have to sit through the more static dialogue, just to see how your new choices played out.

It’s an average length, clocking in at nine hours, so it can easily be beaten over a weekend. If you have a PS4, I would definitely recommend playing this game, especially if you’re of fan of horror. My suggestion is to save yourself some money, and get a three day rental rather than buying it outright.