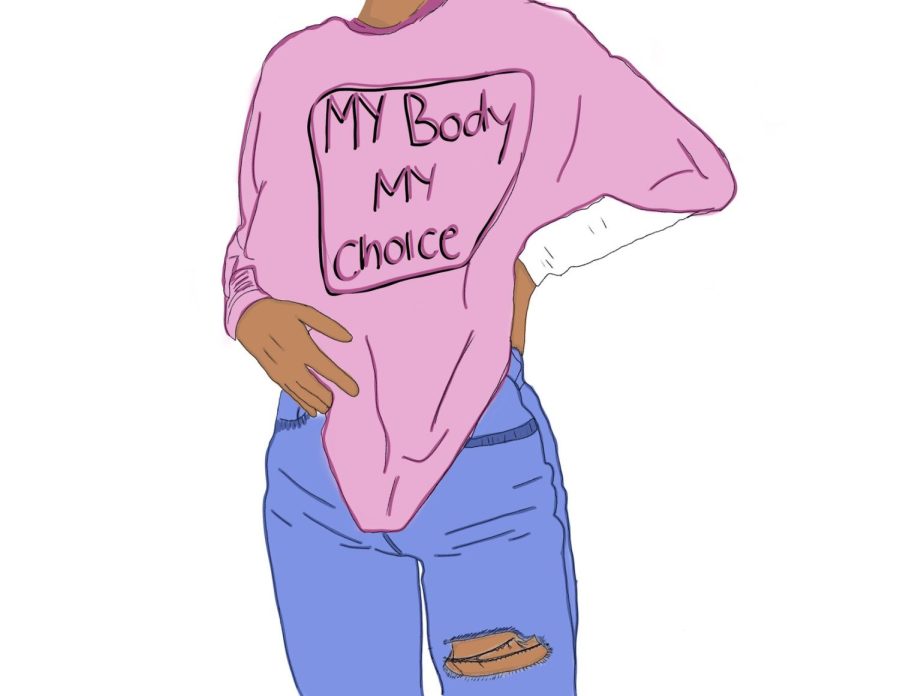 ‘My body, my choice,’ is a phrase often used by pro-choice people. Abortions is a right for women protected by the Constitution. A woman should get the right to choose what to do with their body, no matter the viewpoint of others. (Illustration by Madalyn Rhoads)

Karyn Brown has had two abortions in her lifetime, both medical and surgical. She urges people to fight for women's right to choose.

‘Just give it up for adoption.’

‘Why didn’t you just keep it?’

No matter the circumstances, abortion patients hear these words regularly from people around them or individuals on the news. They are bombarded with contradictory messages from pro-choice and pro-life people and expected to deal with the comments made behind their backs about their own choices; their own opinions.

‘Abortion is a right.’

‘Bans off our bodies.’

Depending on who you are talking to, abortion is either a right all women should have or murder.

Karyn Brown, who wished to use a pseudonym for fear of her and her child’s safety, remembers her first trip to a Planned Parenthood center in Tulsa, Oklahoma.

She said there was an 80-year-old woman who volunteered there and would sit down with those who were in a place where they were considering abortion or adoption. She talked to her about what to do moving forward and actually tried to help.

She wanted people to know their options.

She wanted people to know there was someone there to help them.

She didn’t ever want someone to go through what she went through.

“In the 1960s at her senior prom, she got pregnant and this is before Roe vs Wade,” Brown, a two-time abortion patient, said in reference to the 1973 Supreme Court decision that ruled abortion was a constitutional right.“This is when abortion was illegal. And her mom took her to a back-alley abortionist, someone who just performed these out of their homes that wasn’t a physician and she almost died and she actually rendered her infertile, so she was never able to have kids for the rest of her life.”

The average cost of raising a child up to the age of 18 in the U.S. is $233,610 according to the US Department of Agriculture.

Brown was 20 when she had her first child.

She was a sophomore at Emporia State when she became pregnant. She was managing a restaurant at that time with a 4-year-old daughter.

She was 23 when she became pregnant with a second child.

She had graduated and was working as a server and bartender with a ten year old daughter. She had recently divorced her first husband and gotten into another relationship.

“The second one was extremely physically abusive,” Brown said. “So not to mention how terrible it would have been to have brought a child into that situation where I couldn’t even keep myself safe, let alone a child.”

Brown chose abortion as the best solution to her situation; it allowed her to support her current child and herself, get out of her abusive relationship, and live the life she wanted.

“I was young,” Brown said. “I had just gone through a divorce, and I had just started back in the dating scene…Financially there was no way that I could have afforded another child because I was 23. The person that I was with also was not a very good person and not somebody that you would’ve necessarily wanted to bring a child into the world with.”

Brown has had two abortions in her lifetime after both of her unintentional pregnancies resulting from abusive relationships.

Eight percent of people who get abortions are in an abusive relationship according to the Bixby Center for Global Reproductive Health.

Ninety-five percent still believe five years later they made the right decision according to the Turnaway Study and the Bixby Center for Global Reproductive Health.

Brown is now living a stable life out of her abusive relationships with her teenage daughter; she is part of the 95% that is glad to have decided to get an abortion not one time, but twice.

“I’d be a mom of three, not of one,” Brown said. “I think financially, things would be a lot worse off. I probably would have been on some type of assistance. I wouldn’t be able to focus on and give my one daughter the things that she needs. I was already at some points in my younger life just in survival mode. I would probably still just be in survival mode if I had a 9-year-old and a 10-year-old on top of a teenager.”

Brown carefully considered all her options when she found out she was pregnant. Since she did not feel able to take care of another child at either point in her life, she felt that her options were abortion or adoption of her child.

“I think that adoption, on paper, is a great thing,” Brown said. “I don’t think that people really think it through when they say that’s a better option than abortion. I think that in some cases, yes, if that’s what you personally choose, by all means go through nine months of being pregnant and give birth to a child; see that child; and give that child to another family. If that’s your decision, that’s your choice. Please do that. But there’s a lot more involved.”

There are over 400,000 children in the foster care system today according to Children’s Rights; 6,895 of them are in the state of Kansas according to KVC Health Systems. According to the Adoption Network, only two percent of Americans have adopted children and over 60% of the children adopted are under two months of age.

32.8% of foster care youth experience some form of abuse according to the National Center for Youth Law.

4% experience sexual abuse and another form of neglect.

Before being adopted, children sometimes spend between two and five years in the foster care system, where they move homes an average of seven times, according to the Adoption Network, and are at risk of experiencing any form of abuse. Some of them find loving homes quickly, while others spend 18 years in the system without a true place to call home.

According to the National Foster Youth Institute, only 3% of foster care children go on to graduate college with a degree.

Brown felt that, after putting in time to consider her options, abortion was her best choice to give her the life she needed and to not put a child into a situation that might not allow them to live up to their full potential.

“Just look at all your options,” Brown said. “I did that too and I just chose what was best for me. Don’t let anyone talk you into one way or another. You make that choice.”

Surgical abortions require the mother to essentially put herself into labor and push out an embryo around the size of a pinky nail.

“It’s like the worst period you’ve ever had but times ten,” Brown said. “And then after that for two weeks is like having a really rough period too because obviously all the extra tissue that your body already started to produce in early pregnancy.”

Medical abortions are a combination of two types of medicines taken in two doses of pills, one of mifepristone and another of misoprostel, and can be done up to 11 weeks of pregnancy according to Planned Parenthood.

For Brown, the medical abortion was physically easier for her. There was essentially zero recovery time, while surgical abortions can require a longer recovery time based on how far along the pregnancy was and the amount of sedation the patient received.

Abortion in the state of Kansas is legal up to 22 weeks along a pregnancy. The 22-week mark is nine weeks into the second trimester and the baby begins to become more responsive to noise and movement outside of the mother.

“My personal choice on abortion would be anything 12 weeks after [pregnancy begins],” Brown said. “That’s kind of when you start; it’s your third month and when you start your second trimester. Just for me personally, that’s a cut-off point. That is not a decision I make for other women, that is just my own personal decision.”

Brown supports women’s right to choose whether they want to get an abortion or not but respects that other people have different opinions on it.

“They have their views and that’s fine,” Brown said. “They want to think that a cluster of cells is a living, breathing, functioning person but I think that there’s a lot of things that bring up good points about if that is really a person and they just tend to view it that way. And they don’t tend to look at the fact that it’s essentially a parasite feeding off of you. But everyone’s entitled to their own opinion, I just wish that they had the same approach because they’re trying to take their opinion and make it the law of the land and, unfortunately, that’s going to affect a lot of women.”

Brown fears what could happen to her and all the other women who have had abortions in the past if Roe vs Wade is overturned and abortions become illegal in the 26 states predicted to ban them.

“This could be scary if they take it far enough where they say ‘we’re going to look back at medical records and see people who have had them in the past and try to charge them,” Brown said. “I could essentially be charged with some type of felony for a ‘crime’ that was committed 10 years ago when it was legal, which is scary.”

Brown urges people to support pro-choice movements and keep abortions safe and legal in the United States for generations to come, and allow women to choose what to do with their bodies.

“You cannot take away a woman’s right to choose,” Brown said. “And again, if you choose to think abortions are wrong, fine, don’t get them. But you can’t tell someone else what to do. And also you’re never going to stop abortions. You’re only going to stop safe abortions and that is 100% true. That’s true. You can pull data, current data, from countries that it’s illegal and women die. Women die. That’s just plain and simple.”