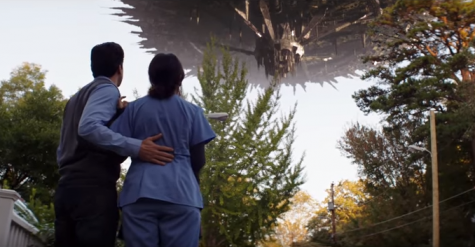 Screen grab from the official trailer of “The 5th Wave.”

“The 5th Wave” is the next dystopian novel turned movie to show up in theaters. It’s about an alien invasion that comes in, as you guessed, five waves.

Waves one through three are completely glossed over in the movie. I haven’t read the book so I don’t know how they were handled there, but I wish they were more present in the film. The first three waves are an electro-magnetic pulse that wipes out the planet’s electronics, a worldwide earthquake and a new strain of avian flu used to send humans to the grave in heaps.

They were handled so well and could have been their own movie. The way that the world was torn apart was so entertaining for the fifteen minutes that it lasted. It almost seems like they were trying to skip through all of those parts to get to the alien invasion, which wasn’t much of an invasion anyway.

The meat of the movie is when Chloe Grace Moretz’s character, Cassie, has to hike from a refugee camp to a military base in hopes of saving her younger brother. I don’t want to spoil anything, but I will tell you that it feels like the movie tries to rid her of all connections as fast as possible.  Cassie is without friends and family for the most part in this movie.

There’s an entire side story going on too. Her high-school crush, Ben Parish, played by Nick Robinson, is training at the same military base that she’s on a quest to reach. The two stories come together at the end in a decent way.

Here’s are my big problems with this movie: it follows all of the dystopian, teen novel tropes. Making one of these movies is like filling in a checkbox at this point.

Event or societal trait that separates it from our own? Check.

Main character has to learn to survive in their new environment quickly? Check.

Main character has a forced romance with dark and mysterious side character? Check.

“The 5th Wave” has every one of these. It also ends on a cliffhanger because suits know that these movies sell like hotcakes. At this point, the market has gotten so saturated. We’ve got “Twilight,” “Hunger Games,” “Maze Runner,” “Divergent” and now “The 5th Wave.” It’s ridiculous.

The movie is very predictable and there are a couple of easy-to-guess plot twists that you can see from a mile away.

Once again, no spoilers, but there’s a scene that happened one way in the trailer and a completely different way in the movie. The plot wasn’t reliant on that scene at all, so I’m okay with the lie. I wish more movies would do this, as I thought that scene would end one way and it really ended another. Good on you, movie. I love the way you lie.

Cassie’s character is almost unlikable. She goes from average teenager, to what you think will be hardcore survivor, only to end up as a girl making googly eyes at the guy with abs. Why is it that every female lead ends up being defined by her male co-star? Women can be daredevils too. Think Furiosa from “Mad Max: Fury Road.” It wasn’t even her name on the box and everyone agrees she was the real main character.

I was so excited for an alien invasion movie and I got half of one, the other half of which was filled with cliche, forced teen romance. I’m going to stop going to these movies if I can’t expect them to tell a complete story. The amount of movies that compress the unique parts of books just to spread out the parts that have been replicated over and over is getting insane.

“The 5th Wave” was alright. It’s not terrible by any means and was enjoyable to sit through, but I can’t suggest paying to see it in theaters. It was going alright until the cliffhanger ending killed this movie for me. Just wait and see if the sequel gets cleared and rent them for a marathon in a few years.

You can watch the trailer for The 5th Wave here.