Freshman Ruven Funschelle battles the issues of bullying everyday. Now he educates other students on the effects of bullying through VR oculus sets. 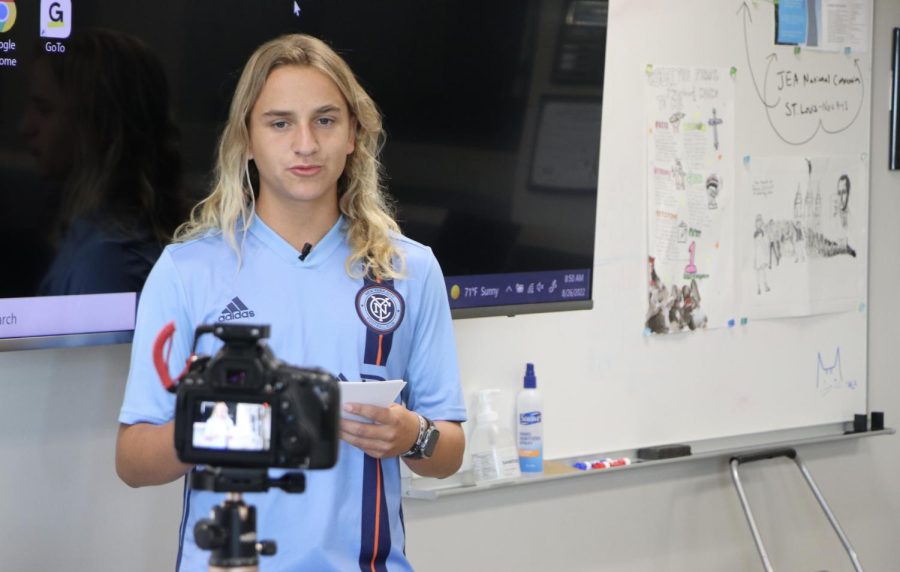 Funschelle tells students about his story and experience on bullying. Students use VR headsets to learn about concentration camps.

Imagine walking into middle school with laughter filling the room, but all the jokes are aimed at one person, about their religion. Maize South Freshman Ruven Funschelle was in this scenario every school day.

Funchelle was bullied for being Jewish throughout his school years and now travels to different schools to talk about his experiences.

“The more times I share it [his story], it feels like the less it beats down on me,” Funschelle said.

The bullying started with his friends poking fun at him about being Jewish and then continued to get worse over time. On one occasion a boy decided to look up Jewish jokes in front of Funchelle and make fun of him. After visiting his sister in New York, he woke up with several hate comments and messages all over his social media.

“So when those messages came out, it was targeted right at me,” Funschelle said. “And I know it wasn’t targeted at anyone else because… I’m the only Jewish kid.”

In 2020, Funschelle and his mother, Kimarie Funschelle, received a grant from Wichita Community Foundation for 30 Oculus sets. They take the Oculus sets into different schools and have the kids use them to learn about Eva’s story. Eva is a Holocaust survivor who takes them on a virtual tour of Auschwitz today and narrates everything that happened in each room. After the kids are done using the Oculus sets, Funschelle gives a speech about his experience with bullying and how he dealt with it and educates students on the effect that it has on others.

Kimarie Funschelle grew up in New York and was always surrounded by diversity and multiculturalism, but moving to Kansas “was always a little bit of a challenge”, since they were the only Jewish family, Kamire Funschelle said.

Finding one trusted person in a group of people is what Kimarie finds most important.