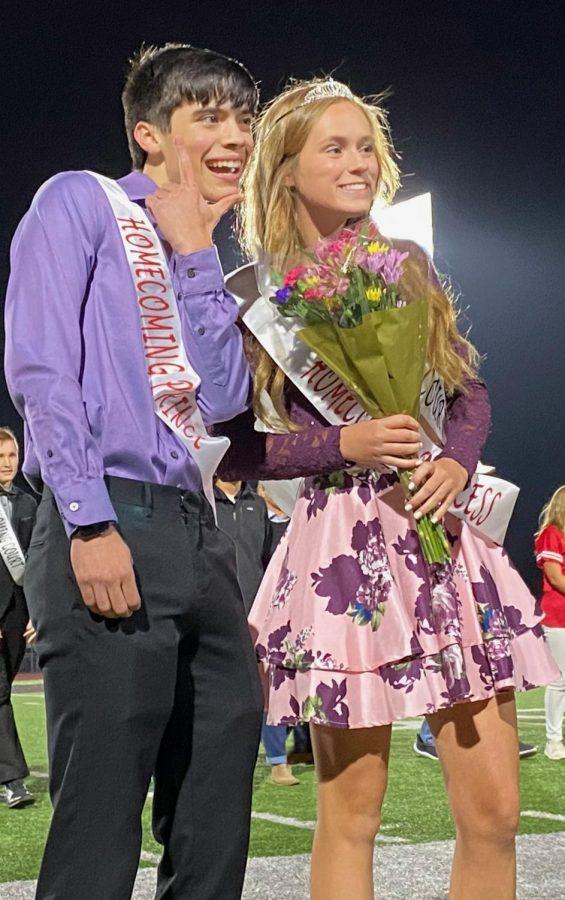 Juniors Isaac Sandoval and Ryan Bender are crowned Homecoming prince and princess. Isaac was the first individual to be crowned as Homecoming royalty this year. He said he enjoyed receiving help from his friends in different ways and will look back on the experience in the years to come. “When I look back on it in the future, all I can do is smile.”

The fall Homecoming royalty received their crowns at the Homecoming game Friday night. Although most of the traditional Homecoming events didn’t occur due to the ongoing pandemic, that didn’t stop the eight couples from making their way onto the field by their parents’ side to await the announcements of who would become the Homecoming king and queen, as well as the prince and princess.

Sandoval said he has never been heavily involved in clubs or sports and did not expect to be in the homecoming court.

“At first I was surprised,” Sandoval said. “but when that wore off, I was more excited than anything.”

Sandoval appreciated the support from friends and family.

“I don’t know where I’d be without the support from everyone around me,” he said. “But I know I wouldn’t be where I am now. The support meant everything to me.”

Sandoval was not the only one shocked with the news of making it into homecoming court.

“Honestly, I was so surprised! It definitely was not the call I was expecting,” Cannizzo said.

Like many of the other nominees, Cannizzo got to run with one of her good friends, Adams. They have been friends since elementary school, she said.

“He found out before I did that we were together, and I kind of didn’t believe him at first,” she said. “But once StuCo told me that we actually were, I was super excited.”

Cannizzo’s family and friends were excited for her nomination.

“My grandparents and sister came down to watch the game and got to stay the weekend.” Cannizzo said. “I had several people text me or come up to me in the halls and tell me they voted for me. It was just really awesome to feel all the love from my peers.”

When the nominees walk out onto the field most wonder if they will be the ones crowned that night but Cannizzo says she wasn’t expecting anything when it came to winning.

“All the other girls are phenomenal, and I would’ve been so excited if any one of them would’ve won.” Cannizzo said. “I was surprised when [stadium announcer] Dan [Loving] said my name and kind of felt a little awkward. There were so many people looking at me, and I didn’t know what to do.”

Cannizzo looked forward to the events that usually come with Homecoming week but was disappointed to find out that Maize could not continue with tradition this year.

“I was a little sad that there wasn’t anything we could really do this year.” Cannizzo said. “But I love Homecoming week so I was still excited to be a part of it.”

Even without the Homecoming events taking place, Sandoval found the fun in it through his friends.

“It was really fun, especially getting to make a skit and have all my friends come together and help me out, and even the people who couldn’t make the skit with us helped out in different ways.” Sandoval said. “When I look back on it in the future, all I can do is smile.”