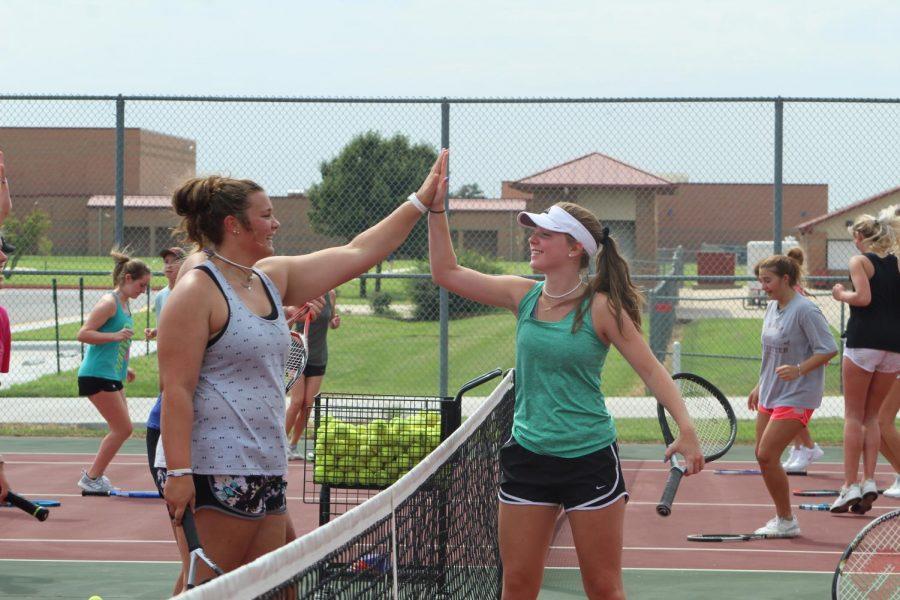 Jolei Hertzel and Riley Wertz celebrating after winning a game in practice.

As the school year starts, so do the practices. Freshmen and upperclassmen are preparing for their upcoming seasons at the beginning of the year by returning to their daily practices.

Freshman Mallory Hertzel said she is excited to finally get the opportunity to step up and play high school tennis for the first time.

“I am most excited to play Maize South and Derby,” Hertzel said.

Hertzel said being a part of the team the opportunity to meet new people and have a new learning experience. She also said she enjoys the increase in challenge from middle school tennis to high school.

“[It’s] more intense because there are more girls on the team,” Hertzel said. “We also condition way more than we did in middle school.”

Sophomore Zoie Ecord said she’s eager for her second season of cross country and ready for the season to start.

“It will be different, but not in a bad way,” she said. “It will be exciting and I think we will be good.”

Like the other teams, cross country has used their practice time to work toward a good season .

“We’ve done lots of running and we have also been doing weight training and core,” Ecord said. “We have incorporated long runs and workouts.”

Senior Preven Christon said he’s looking forward to growing as a team during his senior season for football.

“I’m looking forward to playing with my team honestly,” Christon said. “Just getting the chemistry together again. We have a lot of people coming in and we are just looking forward to building our team more and more throughout the year.”

“I feel like we [as a team] will be better and have better chemistry,” he said.

Christon said he and his teammates are looking forward to competition and championship games at the end of their seasons.