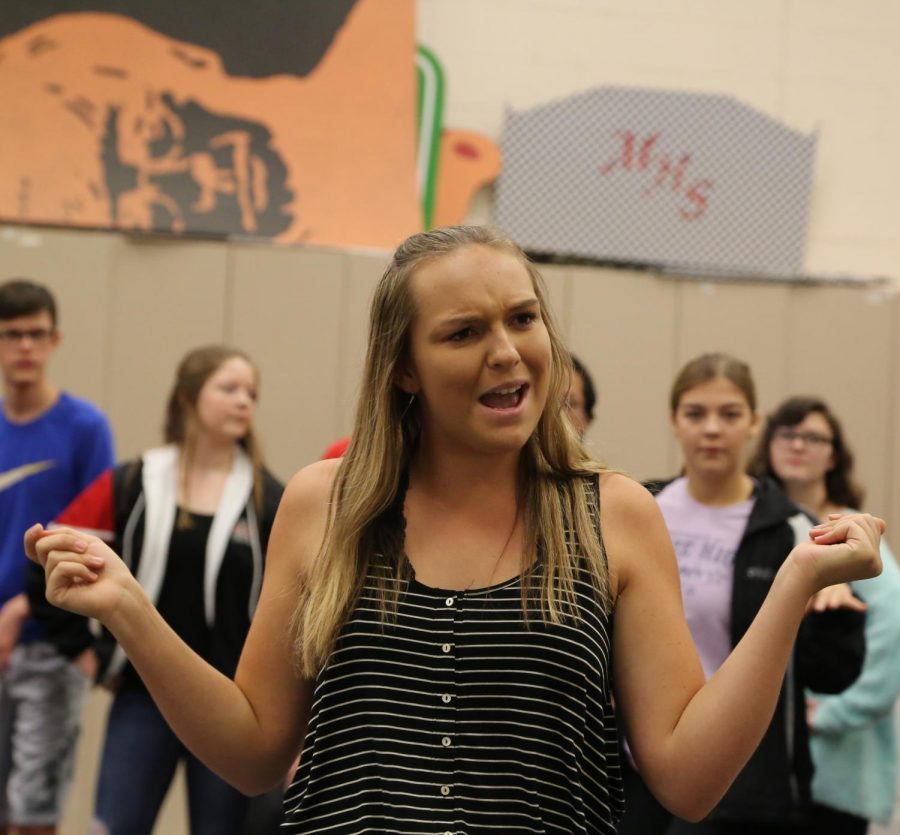 Senior Hope Reasoner has had a passion for singing for as long as she can remember. Being involved in Flight Show Choir, Maize Select Choir, and several Maize musicals, Reasoner’s vocal talent is a major part of her life. This year, Reasoner discovered that she has vocal cord nodules.

According to Renee Edgar, Reasoner’s speech therapist, nodes or vocal nodules are layers of tissue that virbate on the edge of vocal folds.

“[Nodes are] comparable to a blister or a callous,” Edgar said. “ They are usually caused by a person using their voice in either a loud manner.”

While most others would probably have a negative outlook Reasoner took it as a way to better herself.

“I think it [nodes] was really good for me,” she said. “In a way it was kinda a ‘Hey, you need to humble yourself and take care of your voice. You are not unstoppable, you are still human.’”

Her father introduced her to music when she was very young through his own singing and songwriting. He played the guitar and wrote his own songs. Reasoner recalls memorizing her father’s songs to sing with him.

“There was never a time where she did not like singing,” Reasoner’s mother, Pam said. “She really thrives on dancing and singing.”

Reasoner said she was always “that girl” who tried out for solos in her elementary school programs.

“I remember that Hope was very expressive with her voice,” Pierce said. “She most often had a solo or sang in a small group for programs. She didn’t seem to mind vocally demonstrating for others and was supportive of her classmates.”

Her fifth grade year, Reasoner auditioned for her first musical, Pocahontas, through Christian Youth Theater Wichita (CYT). That same year, she auditioned for two more shows, Cinderella and the Wizard of Oz. She continued CYT until her freshman year.

Reasoner has been in ICT Flight Show Choir, a traveling show choir made up of high schoolers in the Wichita area, for four years. She joined Maize Women’s Choir her freshman year and has been a member of Select Choir since she was a sophomore.

Reasoner’s voice had been in good condition until her junior year. She then developed two small vocal cord nodules, or nodes. In May, she traveled to Iowa with Flight to compete, despite having Influenza. She sat for half of the show, but performed in her big solo number. Her voice cracked during her performance and from there her voice started showing symptoms of nodes.

Reasoner’s voice coach suggested that she go see an ear, nose and throat doctor. After running some tests, the doctor confirmed that she had the condition.

“I literally thought my voice was unstoppable,” Reasoner said. “I finally got nodes and it put me in my place.”

“As a person, I do not see any change in her,” Prater said. “But singing is a big part of her life, and I’m sure that the physical release that she has gotten from singing frustrates her now that she does not have it.”

Her doctor instructed that she should avoid talking and remain on a restricted diet to recover. Following this, Renee Edgar, Reasoner’s speech therapist, said that she has seen her improve her diet.

“She did increase her hydration,” Edgar said. “She also reduced her caffeine to avoid drying out her throat.”

Reasoner’s faith is an important part of her life. She believes having nodes allowed her relationship with God to grow.

“It’s my passion because it’s the talent that God has gifted me with,” Reasoner said.

Pam said that her daughter’s relationship with God has always been what makes her the proudest.

“It’s really good when God takes away things that we love because it makes us realize that there are other things that we may have missed and how important those things are,” Pam said.

During the summer, Reasoner traveled to South Dakota for a church mission trip. She said this trip inspired her to pursue music education in the future.

“It was one of those things where I was really focused on the kids on the mission trip,” Reasoner said. “I realized how much I loved kids, I was like ‘Okay that is what I am being called to do.’”

Reasoner said that everyone who helped her along her  journey of nodes has shaped her and helped give her perspective regarding her gift.

“It humbled me to take what people said into consideration,” Reasoner said. “I am putting my identity in my voice and that is not who I am. It helped me figure out who I was without my voice.”