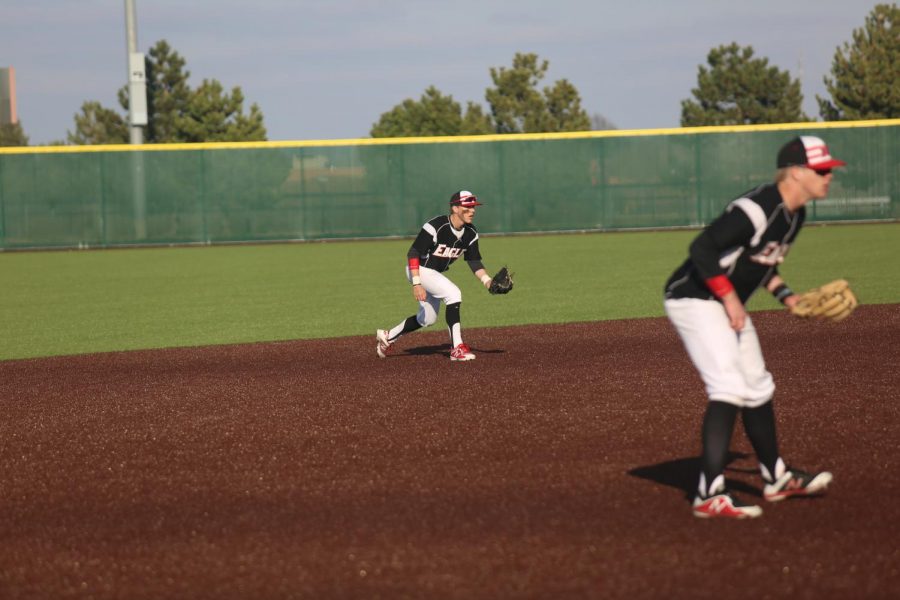 Spring sports are in full swing at Maize, even if the Kansas weather still feels like winter.

Baseball fell to Bishop Carroll 1-0 in extra innings at home on Tuesday.

“It was a well fought defensive played game,” junior Deriq Doty said. “We need to work on manufacturing runs.”

The boys will play again Tuesday away in a doubleheader at Salina Central.

The softball team took victory in their first games of the season on Tuesday. They defeated Goddard 6-2 and Hays 13-3.

This year’s team consists of nearly the same starting lineup as last season.

“Being together again with the same team means that we know and get each other,” she said. “We are always there to pick each other up after each play, at bat or when an error is made. We know that we have something special and we are going to go all the way.”

The Eagles will play at Salina Central in a doubleheader on Tuesday.

Pierce said she was excited and very cold from being soaking wet afterwards.

“Steeple chase isn’t a main event for anyone because it is only at two or three of our track meets,” she said. “I’d always wanted to try it but this was the first year that it worked out. […] I have set some very big goals that I hope to accomplish by the end of the season. I hope to be able to compete for a state title.”

Track will be competing again at home on Friday at 3:30 p.m.

The girls soccer team are the champions of the Titan Classic.

They defeated Northwest 4-1 in the first round of the tournament on Tuesday, followed by a 2-1 win against Derby on Thursday. The Eagles advanced to the finals where they took a 2-0 win over Bishop Carroll on Saturday.

“We had a lot of motivation because Bishop Carroll has always been a big rival for us,” senior Liz Palmer said.

Last year, the girls had placed 2nd in the same tournament against Carroll, so Palmer said this win meant a lot to the team.

“We had to stay focused through the whole week preparing for each game and it paid off in the end,” Palmer said. “I think if we keep playing with the intensity that we brought last week we will get the outcome we all want throughout the rest of the season.”

The Eagles will play Valley Center at home on Tuesday at 6:30 p.m.

The girls swim team placed 4th overall in their first meet of the season at Heights on Friday.

They will be back in action on Tuesday at Andover.

The boys will be back on the court Saturday at Goddard.