The science teacher was invited to speak at Mayor Longwell's media briefing. 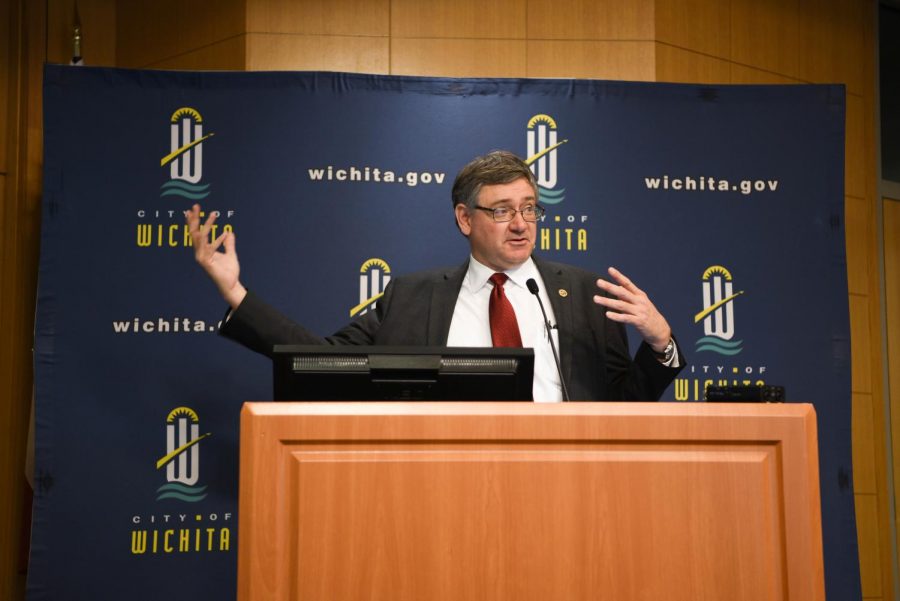 Physics teacher Stan Bergkamp was invited to speak at Wichita Mayor Jeff Longwell’s media briefing today regarding the Maize Solar Initiative. At the briefing, Longwell, a former member of the Maize Board of Education and friend of Bergkamp’s, displayed his full support behind Bergkamp’s initiative.

“We wanted to bring some attention to it because I believe it will absolutely be a game changer,” Longwell said. “Not only for this educational system, but I think for Wichita itself and the region.”

Bergkamp originally pitched the idea following the advice of his father to leave the earth better than he found it. Bergkamp has raised $50,000 for the Solar Initiative since its inception on Nov. 13.

“I see this as an opportunity to leave a legacy,” Bergkamp said. “Not only for the Maize district, not for Maize High School, but for this entire region.”

With a goal of raising $385,000, Bergkamp plans to make Maize the largest solar-producing school in Kansas.

“Eventually, that money will get saved and put into a savings fund that would eventually make Maize the first district in the state to have every school in the district using electricity from solar panels,” Bergkamp said.

Environmentally, this clean energy would keep Maize from creating more carbon dioxide emissions than necessary. However, Bergkamp said he also sees a lot of educational value for his students coming from the project.

“From my perspective, I’m doing it from the education standpoint,” Bergkamp said. “I see the excitement that my kids [students] have when I explain this to them, my physics classes, my chemistry classes. The kids themselves are very very enthused. …”

Bergkamp said he hopes that Maize can set a positive example for other schools close to Maize with the Solar Initiative.

“I see the impact, like Mayor Longwell said, for the region,” Bergkamp said. “I want this to started at Maize High School, but it will radiate throughout the entire district, and then I want to use this as a model for districts for their schools in the region.”

Bergkamp said he wants the Solar Initiative to start a conversation in Kansas about how to properly use electricity while remaining environmentally conscious.

“I think the paradigm has to shift about how electricity is produced and how schools can change how they produce that electricity in a more efficient model that saves money through some great environmental aspect of it,” Bergkamp said. “Most importantly, from a teaching standpoint, it’s a new opportunity to teach the kids about something they’re excited about and they have a buy-in in.”

Bergkamp has garnered much financial support for the project from his students, both current and former. One former student donated $1,000 to the initiative.

“My former students from literally all over the United States, from California to New York, from Texas to Oregon, have all been enthused,” Bergkamp said. “They’ve all contacted me. It’s been great to reestablish those connections. … It’s just, for me, been very emotional because I’ve seen the impact it’s had on the kids and how excited they are for it.”

Not only will the Solar Initiative mean a lot for Maize environmentally, but it will also be of great economic value for the district, Longwell said.

“I think one of the facts that maybe might’ve gotten glossed over [is] this first initiative alone will save Maize district $30,000 a year,” Longwell said. “$30,000 a year that they’re going to put back into education in a number of really neat ways.”

Although many students have donated to the project, Longwell said he thought it was important for more corporations to take part in the initiative.

“Now we’re going to encourage some of corporate America to step to the plate and help us get to the finish line on this initiative,” Longwell said. “It’s certainly something that will be meaningful for our students for the next generation, for our region, and one that I can easily get behind.”

Bergkamp hopes to have sufficient funds for the project to begin construction in late summer.

“Best-case scenario is by the first of August of this year we have sufficient money raised to actually start building the project,” he said. “Ideally, we would have all $385,000 raised, but even if we can get to $100,000, which we’re already halfway there, then we can install the infrastructure into some of the solar panels, and as money continues to come in as savings from those solar panels that we put on, then we can finish the project.”

Although they still have a ways to go, Bergkamp said he is fully confident that the Solar Initiative will meet its August 1st goal.

“I see that as like a worst-case scenario based upon the success that we’ve shown so far and the support of Mayor Longwell and the business communities, I think it’s very realistic by the first of August we actually start construction, which will take about a month,” Bergkamp said. “So hopefully by Labor Day weekend, we’re producing a tremendous amount of electricity that’s from those solar panels.”

Although the Solar Initiative has gained a lot of financial support from its students, Bergkamp said he hopes to see more sponsors from businesses and corporations.

“I think it’s going to do nothing but greatly encourage, not only from the perception standpoint but also, as Mayor Longwell alluded to, going out and trying to get corporate sponsors,” he said. “I love my students to death, but at $100 at a time from starving college students, it’s going to take me a while to get there.”

Bergkamp said that he thinks the ramifications of the Solar Initiative extend far beyond any one school.

Longwell said he is excited to see where this initiative goes and plans to revisit the project in the near future.

“I’m looking forward to this initiative really getting started,” Longwell said. “Next time we talk about this initiative and have any kind of press conference, we’re going to do it out at Maize High School showing the panels going up.”

You can see the full press briefing here. To support the Maize Solar Initiative, you can visit the Facebook page or website.