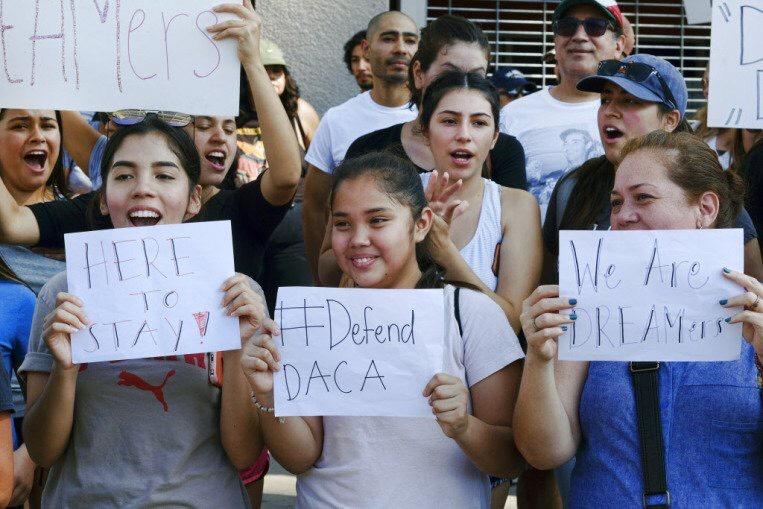 Trump announces the congressional review of the Differed Action of Children Arrivals [DACA]. 800,000 DACA immigrants could be deported. (Submitted by James Irving )

Trump announces the congressional review of the Differed Action of Children Arrivals [DACA]. 800,000 DACA immigrants could be deported.

A life in limbo

She walks into a classroom, a light sweat dripping off her forehead. Paranoia swoops through her, making her jump at every sound. She never believed she would have to be scared of the only country she has ever known. But as she takes her seat, she feels everybody around her. She thinks they know her secret. A secret she had only just found out about herself.

For a majority of her teenage years, a Maize student has stood up for illegal immigrants. Being an immigrant herself and having some sort of relationships with other illegal immigrants, she said she felt that she was the right candidate to take a stand.

However, recently, everything changed when her parents told her she was a part of Deferred Action for Childhood Arrivals [DACA], instead of being a resident like she thought for 14 years.

“I am good at standing up for other people,” she said. Play is not using her name to protect her identity. “But then it became me. …  I got scared, and I am still scared. … But finding out about it kind of made me even more passionate. Really there is nothing to be ashamed of. We are Americans, just not on paper. ”

On Sept. 5, President Donald Trump ordered a congressional review of the DACA program. Congress will have six months to decide to keep the program, reform the program, or declare it unconstitutional and remove it. If Congress decides to end the program, 800,000 immigrants, referred to as Dreamers, would be eligible for deportation.

“Make no mistake, we are going to put the interest of AMERICAN CITIZENS FIRST!” Trump tweeted. “The forgotten men & women will no longer be forgotten.”

During Trump’s election he referred to DACA as “illegal amnesty.” He said that former President Barrack Obama, who created this program on an executive order, should not have had the power to waive immigration laws.

Obama wrote in an Facebook message about how the possible ending of the program would be immoral.

“Let’s be clear: the action taken today isn’t required legally,” Obama said. “It’s a political decision, and a moral question. … Whatever concerns or complaints Americans may have about immigration in general, we shouldn’t threaten the future of this group of young people who are here through no fault of their own, who pose no threat, who are not taking away anything from the rest of us.”

Dreamers, brought here by their parents as a child, were raised in the American culture. The Maize student said America is the only country she has ever known and the only one she ever wants to know.

She was brought from another country by her parents on a visa as a child. However, about a year and a half later, her family’s visas expired and they could not get it renewed.

“My parents made the decision they would rather stay here and face the challenges of being an undocumented citizen then going back to [my home country] and face the oppression,” she said. “So when I was 3, that was when I became undocumented.”

However, she said her parents raised her to believe she was a resident to protect her from self incrimination, ridicule and fear. When she turned 15, the age you have to be in order to join DACA, her parents sent in her application without informing her. It wasn’t until two years after she was enrolled in DACA, and a week before Trump announced the program would be reviewed by Congress, that her parents informed her with the truth.

“So when I found out it was kind of like 14 years of fear flooding into me all at once, which is really overwhelming,” she said. “But they did it to protect me from myself, in a way, because they didn’t want me telling anyone.”

However, even believing she is a documented immigrant she said that people still bullied her growing up just for being an immigrant in general. She said she feels that it’s because people don’t understand.

“You know there have been instances where people try to talk about the immigration system when they don’t know anything about it,” she said. “Because of that, that ignorance becomes a form of hate, which is not their fault. It’s just they are not educated enough on the subject to understand.”

Even with the chance of being deported back to her home country, she said she is not planning on going into hiding anytime. She said she and the other Dreamers are fighters and will be a force to be reckoned with.

“We are the survivors,” she said  “We have survived worse; we’ve survived and escaped our own countries. So we can get through this. So as for us, we aren’t going into hiding, we’re going to live our own lives just as we were before. Life might get a lot harder, and it might come up with a lot more hits than just a regular citizen, but I don’t think any of us will hide from this because there are so many undocumented immigrants.”

She said she fears how people within her community will react to the DACA students that reside there.

“I hope that they [Sedgwick County] would be one of those communities that wouldn’t turn their backs on me or the other students,” she said. “There are a lot of people who might be against immigrants now and the undocumented, but if they find out who is undocumented, and find out the type of people they are, it might change their minds.”

On a national level, she said she sees both sides of the people who support others like her and those who don’t.

Within high school she said she worries about how her peers would view her if they knew who she was.

Superintendent Chad Higgins said, as an educator, that the community of Maize High shouldn’t care where any students come from.

“It is critical to understand that public educators get into this business because of a genuine belief that we can make a difference in this world by making a difference in the lives of every kid we reach,” Higgins said. “We only care where they come from if it helps us learn how we can better serve their needs.  Where they were born, why they are here, or what a politician thinks of them mean nothing to us. If we don’t do everything we can for every kid, who will?”

As an undocumented immigrant, the Maize student has no legal rights other than the ones provided by DACA. Through the program, she is given a workers permit, permission for a driver’s license and a social security number.

“Most job applications will ask you for a social security number,” she said. “All of the jobs I have applied for have asked for valid proof of legality, so without that it makes life a lot more difficult.”

She said that her parents, who just became residents in March due to having a sponsor, had to take low profile jobs with no benefits before becoming residents.

“We aren’t taking American jobs,” she said. “We are taking the jobs that nobody wants.”

Being undocumented also affects the college choices for her. Without legal status, she said she cannot apply for government support.

“I have worked really hard in high school and if I was a citizen I would most likely get into any college that I wanted,” she said. “However, because I am undocumented, I can’t apply for half the colleges I wanted to anymore.”

The Kansas Hispanics Education and Development Foundation, a nonprofit organization developed in 2007 by the Wichita Hispanic Chamber of Commerce, was created to develop a platform for donors to donate a tax-deductible contributions for scholarships and other education initiatives for immigrants like the Maize student.

“Being designated as a DACA student requires that you be a student or graduate from high school among other qualifications,” board member Tom Borrego said. “Many of our students excel academically, but often do not have the financial resources to attend college. KHEDF steps in with scholarship support to help augment these expenses.”

Borrego said that while not all the applicants in the program are DACA students, most are. And the nonprofit is driven to support the DACA community.

“DACA students have proven themselves in the classroom and in the community,” Borrego said. “Many of these students are leaders and for all practical purposes have become a part of the American culture. … Rescinding the DACA program has created tremendous anxiety for the students and their families. While trying to figure out how to pay for college is stressful enough, knowing that you may be required to leave the only country you know is traumatic.”

Borrego said the DACA students who are inside the program have expressed fears just as the Maize student about how their lives have been left in limbo.

“DACA served as the last hope for these students,” Borrego said. “Now with DACA gone, their lives are in limbo. As a country, I think we are better than that. I think we are more compassionate than that.”

The Maize student said that if the program ended and if she were sent back her whole life as a whole would become a warzone. Her home country, which she asked not to reveal, has no groceries stores, no functioning hospitals and the people are at constant war with their government.