A suicide at Field of Screams was reported on Friday night. 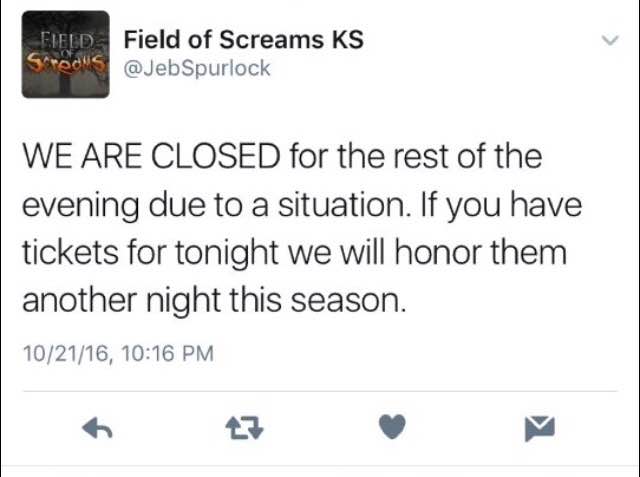 Field of Screams was shutdown last Friday after a shooting.

Field of Screams was shutdown Friday night following a shooting at the location.

It is being reported that the shooting was in fact a suicide. Wichita South student Brianna West claims that she was related to the shooter. West went to Facebook to say that she was with her boyfriend when her intoxicated uncle pulled a gun out and shot himself.

“I’m getting really sick of seeing all these false news stories about the Field of Screams!” West said on Facebook. “It was a suicide! Not a shooting! And it was my uncle! I was face to face when it happened, not just a stranger claiming to know the story!”

Sophomore Ryan Burkhead, an employee at Field of Screams, shared his story of the events Friday night.

“I was sitting in the field and heard a pop, and then one of the groups came through and just told us to stay in our spot because something had happened,” Burkhead said. “This niece was wrestling her uncle because he pulled out a gun and he was drunk, and when they were wrestling he pulled it up and shot himself.”

Field of Screams said on Twitter that they will honor any tickets purchased for Friday night on another night this season.